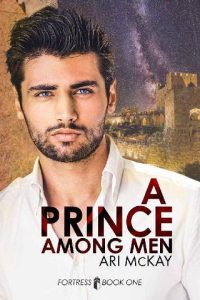 Where governments fail to protect the innocent, you’ll find the men of Fortress.

Sebastian Chase knows danger is part of the job. As an operative for Fortress, he and his cadre act outside the rules of any nation, risking their lives to fight terrorists and rescue victims of kidnap and torture — not for fame or money, but because it is the right thing to do.
Dr. Sean Grimaldi is the most reluctant royal in the world. His father renounced his position as Prince of Akkadia in the name of true love, and Sean has no desire to take up his own title. After his parents are killed in an accident, however, Sean returns to Akkadia, lured by the King’s promise to build a hospital in their honor. Instead, Sean is imprisoned and faced with Faisal’s demand to marry and produce an heir — or else!
When an operation in Akkadia ends in Bash’s capture, he and Sean are brought together, and neither can deny the chemistry between them. But fate intervenes when the King of Akkadia is shot, pushing the country to the verge of civil war. Now Bash must risk everything to find the traitor who is murdering the heirs to the throne — because if he fails, he will lose the only man he’s ever loved.