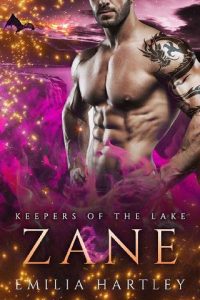 He doesn’t even know her name.

When Zane Thompson emerges from the lake, he can barely walk. He certainly can’t run after his mate. There’s no question about it, though. She’s his fated mate—her screaming at the water’s edge broke the curse that had kept him asleep for years. His nightmares still haunt him in this unfamiliar waking state, though. He fully intends to deal with the authors of his curse. But later. When he sees the blonde, everything else falls away. His nose is full of her scent—gardenias and vodka. That’s his mate.
He needs to find her.

Chelsea Montrose wants to forget her boring classwork, forget her lonely house, forget the scary wave that nearly killed her, and especially forget her cheating ex, but neither her vodka nor her one-night stands help her forget for long. Maybe that’s why she goes out to the lake one last time to scream out her frustration. She’s had way too much to drink this time, though, because she falls into the water, and almost convinces herself that a naked, sexy hunk pulls her back out. N-A-K-E-D. No way is that real. Chelsea hightails it back to her place and throws out her stash.

But the naked guy (now clothed) follows her back to her house, tells her his name and spins her some fantasy about being a dragon shifter she saved from a curse. He seems harmless, and their chemistry is great, so she lets him stay the night, but no way is she getting into anything more than a one-nighter, especially with someone so unstable.
That’s the last thing she needs.

So why does she have to keep convincing herself?