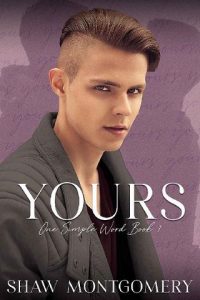 Yours (One Simple Word #1) by Shaw Montgomery – Free eBooks Download

Dare doesn’t mind second glances and getting people’s attention. As a take-charge guy who looks more like a twink, he’s used to surprising guys…and his wicked streak means that most of the time he likes it. But when two shy hunks spend their evening watching him with wide eyes and nervous smiles, he knows he might have found exactly who he’s looking for…his Mr. Rights.
Scott and Ryan aren’t ready to challenge convention.
Secrets are harder to keep than Ryan and Scott ever imagined, especially when they’re keeping them from each other. Still, confession is only good for the soul when a friendship isn’t on the line…or at least that’s what they tell themselves, right up until the Dom with a wicked smile walks into their life.
When one take-charge flirt lands in the laps of two wary hunks, life will never be the same.
56k Words
This series was originally titled The Weight of a Word. This book was previously titled Us and has been expanded by ten thousand words to show more of the start of their relationship.