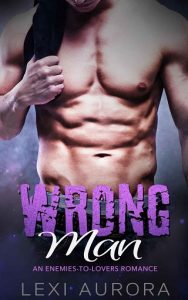 The best man? He’s not even a good guy. He thinks he can say anything he wants and get away with it just because he’s hot as hell.
I’d like to prove him wrong, but there’s something about that smile of his that says, “I’ve got you right where I want you.”
He’s the most arrogant man I’ve ever met, and normally that would mean me dropping him flat.
He’s bossy. He’s argumentative. I know for a fact that he’ll say anything to get into a girls pants.

The best thing for me is to stay as far away as possible—but I can’t do that, because it’s my best friend’s big day.
Nothing is going to ruin it for her, so I can deal with a jerk like him while we get through this wedding.
He probably thinks that me putting up with him means all his flirting is getting him somewhere.
He can think what he wants. I’m not giving anything to him no matter what he tries.