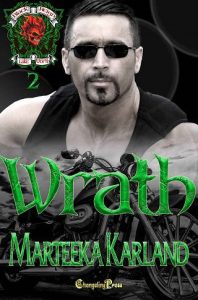 Wrath: When El Diablo sends me to infiltrate the DA’s office and find out who’s involved in the corruption there, I’m all over it. Being a lawyer, I’m singularly suited to El Diablo’s purpose, and I know the system inside and out. I am also adept at blending in, even with my muscles and tatts. We’ve known since Justice from Salvation’s Bane took a prison sentence he didn’t deserve that someone from the DA’s office was in the back pocket of the wrong people. Those wrong people are in the form of a rival MC who rule their territory with an iron fist and are trying to encroach on Salvation’s Bane as well as Black Reign.

Then I meet a sexy little platinum-haired escort and all bets are off. I’m attracted to her like I’ve never been to another woman, and it’s messing with the Zen-like calm I’m famous for. If I can’t pull myself together enough to complete this job, I’ll fail my club and, more importantly, my mentor, the club president, El Diablo. That’s something even this unholy attraction can’t cause. But what’s a man to do when all that stands in the way of the happiness of a sexy single mom and her feisty but vulnerable daughter is club business, and a few Saint Bernard puppies?

Celeste: I’m in a financial jam of the worst kind. I need to make enough money to pay for my daughter Holly’s medical bills. The sheer volume of money I need is overwhelming. Working doesn’t touch it, and no one wants to hire me full-time because of the cost of insurance. The only way to finish Holly’s leukemia treatments is for me to keep up the payments to the hospital and clinic. If I can’t, then Holly’s chances of remission may only be a lost dream. Out of options, I accept an offer to be an escort. Not only that, but I soon find myself working for a motorcycle club as a “cam girl,” doing live sex shows. Glamorous? Not at all. But it’s more money than I can make working three jobs. Imagine my surprise when the man who paid for my services as an escort turns up in the control room of my first cam show. He’s sexy as sin, and much more than he appears to be. He’s also got me completely under his spell. Which sucks because he’s quite possibly the rudest jackass I’ve ever had the displeasure of meeting.

WARNING: Contains graphic sex and violence as well as drug use that may be triggers for some readers. You can expect a complete story for the Hero and Heroine as well as a HEA and NO CHEATING.