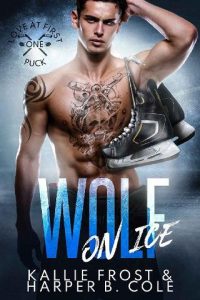 The son of famous ‘Slapshot’ Shaw himself, Zane has big skates to fill. When the pressure becomes too much, he transfers to a school where he can keep his family happy by playing hockey, but without worrying abut the pro shifter league catching wind of him.
Hoping to find himself, instead he discovers two brothers, an underdog team dreaming of making its mark, and an omega he can’t stop thinking about…
An omega who hates playing…
All Wesley wants to do is work his way toward a degree in journalism. Had he known actually playing a sport for a semester was a requirement, he would have chosen a different school. Now it’s too late and the only thing standing between him and his degree is the ice. Then he meets Zane.
Thrown together to improve their game, neither expects the sparks to fly off of the ice too… As the championship game draws closer, Zane and Wesley have an unexpected deadline of their own; Wesley’s due date.