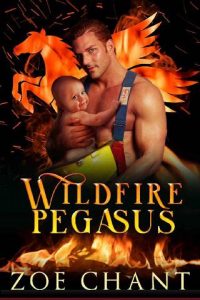 The baby isn’t the biggest secret…

Diana never even knew his name. One impulsive, out-of-character night with a smoking hot firefighter, and now she’s a struggling single mom. She may have had to give up her dreams, but she’s determined to give her precious baby Beth everything…including a chance to know her biological father.
When a twist of fate lets Diana track the firefighter down at last, she’s braced for him to run screaming—not sweep her into his arms and hold her like he’ll never let go. Yet she can’t escape a nagging feeling that it’s all too good to be true. Is it just her anxiety disorder…or something more?
1. Rescue mate
2. Claim mate
3. Catch newfound daughter (who turns into an adorable, alarmingly fast pegasus) yet again
…were not on Callum’s to-do list for the day. Now he’s flying blind without a plan, and only one thing is certain. Diana and Beth are his, and he’ll do anything to keep them.
Even if that means hiding the truth.
It’s not just that he’s a pegasus shifter (though that’s hard enough to explain). How could Diana trust him to be a good father if she knew about the crippling curse of his special power? Or the hidden pain in his past? And as if his personal demons weren’t enough, there’s the literal demons stalking his fire crew…if Diana knew any of it, she’d bolt even faster than little Beth.
Especially if she discovered the biggest secret of all…
He isn’t Beth’s father.