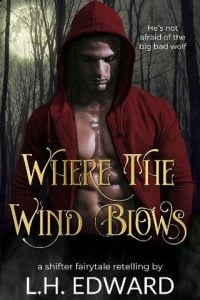 Where the Wind Blows by L.H. Edward – Free eBooks Download

There’s one thing I know as certain in this world—Werewolves are real—and it’s my purpose in life to get rid of them.
At twelve, Connor Walsh experienced the best and worst month of his life while summering at his cousins’ lake house, nestled in the woods of Portland. What started with a proclamation that Maisie Blake was the girl of his dreams, quickly turned dark when he lost his parents to a brutal werewolf attack on the side of the road.
Fourteen years later, Connor no longer dreams of pretty girls. Instead, he’s honed his skills and spent his years researching, hunting, and killing the shifters with one goal—seeking vengeance by eradicating the species.
Forever moving, forever chasing, he’s only one step behind the shifter he’s been circling.
~~~~
When Maisie Blake was eleven, she met a boy in the woods of Portland at her friend’s lake house. What started as her first glimpse into what she hoped would be her first love, turned into a nightmare when hunters killed her parents under the light of the full moon.
Forced to live with her grandma’s pack from then on, she eventually escaped the confines and rituals she hated and has been running ever since. Running from the pack, running from hunters who are only ever one step behind her no matter where she goes. She no longer dreams of love of any kind. Her sole focus is self-preservation.
When Connor and Maisie’s paths collide after fourteen years, both feel that initial childhood spark and long to cultivate it. But when their realities make them the hunter and hunted, these sworn enemies must choose a path forward—either find a way to the happily ever after they both long for, or destroy each other denying it.