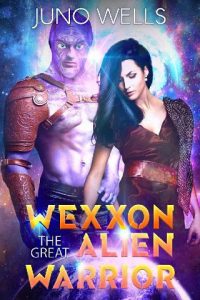 I accidentally opened a door to an alien planet…

One minute, I’m working at NASA and the next I’m on Xelxar and a huge, purple alien is trying to kill me.
By sheer luck I kill him instead, but then another shows up.
The clearly alien warrior Wexxon. He’s eight fee tall, purple skinned and his face is so different than a human’s, with aquatic features, a hard nose and scars covering his body. He says the alien I killed was supposed to be his next competitor in the arena. Having killed him myself, now I’ve earned the honor of facing Wexxon in a fight to the death.
I can’t fight this muscled, enormous alien! Wexxon offers me a way out. Marry him. Married partners aren’t allowed to fight in the arena.
If I’m going to survive and find my way back to Earth, I must become his space bride.
I’m mortified at being forced into a marriage with an alien but I can’t pretend like I don’t find my new husband hot. I need to focus on getting back to Earth, but the longer I stay on this planet, the more I find myself falling for the huge, purple skinned beast.
How am I supposed to make it back to Earth when I can’t keep my hands off the alien warrior in my bed?