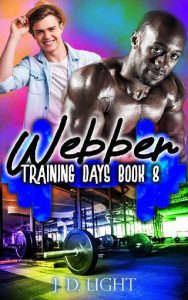 Keller Peters lives to piss off his uppity mother. What could the woman expect who judges people by their careers instead of their heart? It’s one thing for her to criticize his career as a life couch to those trying to get off drugs and be productive citizens in the world. He could handle her. He’d been doing it his whole life, but her constant rudeness where his best friend and roommate is concerned is about to send him over the edge, especially since Webber Bines is the best person he knows. What better way is there to make the woman straight climb the wall with her head on backwards and hissing, than to bring home his new “boyfriend” who also happens to be the roommate who works “mall security and has that hobby with the heavy weights.”

Webber Bines knows posing as his best friend and roommates boyfriend for Thanksgiving is probably a terrible idea, but he’s never succeeded in telling Keller no since the day he met him, so it comes as no surprise to find himself at Keller’s parent’s home over Thanksgiving. It is, however, very surprising to find himself the recipient of a long, dirty kiss on the couch in the middle of the living room.

That one kiss changes everything for the two as feelings they were both denying come screaming to the surface, demanding to be acknowledged. They keep telling themselves they are going to keep their hands to themselves, but that’s a lot harder said than done, and things aren’t helped when Keller decides to pull the fake boyfriend gig back out in order to scare off a man who seems hell bent on ruining Webber’s family Christmas… because that is what friends are for. Not because he’s dying to be Webber’s boyfriend again, even if it is only fake.