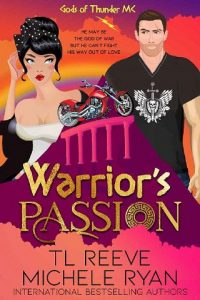 Ares aka Warrick Kemp—PI by day, MMA fighter by night, isn’t looking for anything permanent in his life. He has his sons, Phobos and Deimos, his sister Eris, and his faithful familiar companion Kyon by his side. However, everything else around him has lost its luster, until he meets her—Harlow Black.
Harlow Black has always lived in her brother’s shadow. Since coming to him after divorcing her worthless husband, she convinced herself being single was better than settling. Besides, having her nephew by her side gave her purpose when she needed it most. Yet, when she meets the enigmatic Warrick Kemp, she’s enthralled. He’s all she ever wanted. Not only is he way out of her league, but he’s also Ares the God of War. The one man—God—she’s had a crush on since she was a teenager.
Unfortunately, for Harlow, her world comes crumbling down around her, and this time, Warrick is caught up in her family drama. Will Warrick and Harlow be able to work together to set things right? Or will the Fates make them star-crossed lovers?