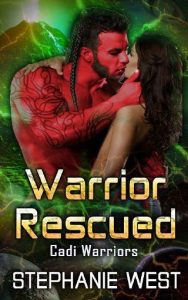 Elena had no clue aliens exist and then she awoke to discover her abductors had crashed while trying to colonize a new world. For two long years she’d been struggling on the baked and barren hellish planet, forced to survive all alone. The only thing that keeps her going is watching over her fellow humans, still in stasis and blissfully unaware of the nightmare all around. Then one day all that changes.
She should’ve known better than to follow the crashing ship, because what she found in the wrecked cruiser is the devil himself. The alien is huge, muscles for days, with blood red skin, a tail, and fangs. It doesn’t matter that he’s built like a god and she is so very very alone, she can’t afford to put her faith in the devil.
Payim is sore as he regains consciousness, though not as sore as his pride. This was supposed to be a simple reconnaissance mission. Go in, look for wreckage from the colony ship or proof the vile Jurou Biljana are building an outpost, then get out. He couldn’t believe he crashed. When his vision clears, he spots the petite human and her big brown eyes filled with terror. Before he can get out of his seat, she runs. As much as he hates chasing the frightened little survivor, he’s here to help.
Elena has been lost for years, Payim lost for a lifetime, but love finds them both in Warrior Rescued.