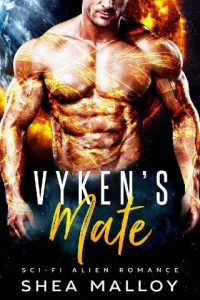 Willa would rather die untouched than marry a man she doesn’t love. She runs away from home, eager to reclaim her independence. Except, she takes the wrong path into Vyken territory.
Captured, Willa is brought before the Vyken leader, Jorgan. Although she fears him, she can’t deny her illicit attraction to the powerful alien male. In his amber eyes she sees a hunger that excites her too. She knows that he will be her first and her only.
Two years after The Rift, Jorgan is still getting accustomed to his new life on a planet he hates. He resigns himself to endless misery. Until the beautiful human female is brought before him.
She is a human and he is a Vyken. It’s forbidden to want her, but his blood burns to claim her soft innocence. Even if it’s wrong, he’ll make her his.