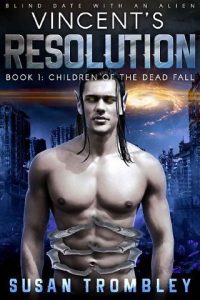 Gabby:
My bestie, Valerie, offered to hook me up with a quirky oddball of a man she met at the gas station where she works. She insisted that he would be perfect for me, because he’s into the paranormal so much that he has modified his appearance to look like a vampire, complete with fangs, pointed ears, and inhuman eyes. She knows I love anything paranormal or supernatural—or just plain weird—and honestly, her description of Vincent certainly had me intrigued.
Though she managed to talk me into taking Vincent to her New Year’s Eve bash as my blind date, I had my reservations, but one of my New Year’s resolutions was to take risks and try new things in an effort to live my life to its fullest, instead of just existing. Starting that resolution early seemed to pay off when I met my date. Vincent turned out to be as gorgeous as she’d described, and his body modifications were certainly as unusual as she’d promised.
Then he took me back to his place, and I discovered that his body wasn’t modified at all. He’s not pretending to be a vampire.
He is one—and an alien one at that!

Vincent:
When it came time to seek my mate, I knew I would end up traveling to another dimension through the Nexus to find her. Wanting the kind of forever-love that my parents enjoyed, I focused on my half-human side and decided to search for a human mate on a world much like the one my own mother, Evie, was abducted from so many years ago.
To my surprise, I was able to hide in plain sight amongst the humans, who believed my Fayi features were a result of artificial body alterations. As long as they never saw me with my shirt off, they wouldn’t guess that I had six deadly, venomous claws the Fayi call “claudas” that extended from my chitinous spine. Unfortunately, being unable to take my shirt off until I knew I could trust a woman not to freak out when she saw my claudas made dating more complicated.
Then the manager of the gas station where I stopped in every day to satisfy my sweet tooth told me all about her best friend—a woman named Gabby who loved the unusual and paranormal. Gabby sounded exactly like the kind of woman who would embrace my inhuman nature—and allow me to embrace her with my claudas.
I just hoped she would be prepared to leave her world behind forever and return with me to the Dead Fall to become the most important part of mine.