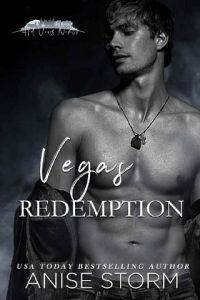 The son of Hollywood elite, Jagger Crawford was content to live off his parents’ fame while spending his days and nights participating in one drunken orgy after another. When it came to salacious publicity, he was a walking, talking headline. Jagger was a lost cause, or so the gossip mongers said.
Image consultant Amelia “Lia” Franks believed otherwise. Even after finding out that her first client is Hollywood’s most notorious bad boy, she is determined to do what no other has been able to do: redeem the so-called “unredeemable”.
Lia accompanies him to Las Vegas for what Jagger thinks will be a week of debauchery. Once there, though, she begins to realize there is more to Jagger Crawford than meets the eye. His larger-than-life personality is only a small part of him. There is so much more beneath the surface.
Good girls like bad boys, but that isn’t true for her. Jagger is simply a client and nothing more. Or is he? Is that half-truth as fake as the relationship they have to maintain around his friends? Or is it entirely possible that when seeking redemption, they have found something more…
Spend a couple of hot Vegas nights with Jagger and Lia to find out….