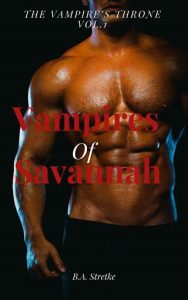 Something is coming. Change is in the air for the Vampires of Savannah and no one knows just what is in store.

Fabian Duval has been the Commander of the Brennan Coven since arriving on these shores some 200 years ago. He leads the soldiers of the Brennan Coven and oversees all security. Master Rian Brennan and his coven of Vampires are new to the scene here in South Georgia and the more aristocratic covens don’t let them forget it. But with the backing of the Vampire King, they have thrived in their slice of Savannah. The night that Fabian walks into the Nexus bar everything changes. No one believes that Beloveds exist. Just a tale told by vampire elders that was never really true. Fabian has never known a single vampire who has found their beloved, until he locked eyes with Rhys Jones.

Rhys Jones is a nobody, at least that’s what he tells himself. He’s working three jobs and doing online classes part-time as he saves up enough money to really make a go of his life. He knows how to lay low and not draw attention. In a place like Savannah and a bar like the Nexus, attention can be a deadly thing. Everything he has ever known and believed to be true is about to be turned on his head when Fabian Duval strolls into his life and saves him from a patron of the bar. Can this be real? Can Fabian really want a guy like him?

There are dangers and political machinations at work in the shadows of Savannah’s stately mansions and not everyone is going to get through this alive. Some scores are only settled in blood.

The road to the Vampire’s Throne runs red.