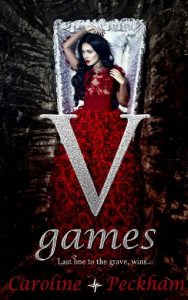 LAST ONE TO THE GRAVE, WINS.

Being a killer wasn’t what eighteen year old Selena Grey ever expected she’d become. But with her stepfather’s blood fresh on her hands, she finds herself walking into an eight by six prison cell where she’ll live out the next twenty five years of her life.
Or so she thought…
When a man as beautiful as he is terrifying walks into the prison, Selena is the only one seemingly unaffected by his charms. But Varick’s impossibly dark eyes are trained on her and her alone, frightening Selena of what his presence forewarns. It’s not long before she finds out as she wakes on a ship in the dead of night, a captive of the forbidding Varick who seems more beast than man.
But when she arrives at a baron and isolated island in the stormy north sea, she soon realises that the obnoxious Varick may be her only hope of survival. Because, in a place where polar night reigns for the next six months, a powerful and cruel family are about to start this year’s season of the V Games. And Selena is marked to participate in the blood sport, hunted by ravenous vampires and surviving the harsh terrain of the bleak island. And, not only that, but Selena just became the highest bid on contestant in a century…