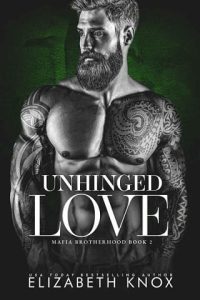 Neither of us were looking for love, but when danger came creeping in, we couldn’t stop it.

Kiera
I thought my life was finally turning around for the better, but the moment I took a deep breath it came crashing down around me. My ex-husband found me and our daughters. He scared the living hell out of me and hurt me in the process, leaving open-ended threats in the midst of it all. He wanted to scare me, and boy did he succeed in doing that.
It wouldn’t have been so bad if my ex wasn’t a world-renowned fighter. If he was some average guy I might not be so scared, but he knew how to pack a punch and what to do to hurt someone badly.
I told my godfather about it and he set up a meeting with someone who could offer my family protection. Soon enough, I was being guarded by two men. I felt safe for a while, but just like the time before, it didn’t last for too long.

Shaun
I’m used to working in dangerous situations. It comes with the territory when you work for the Mackenzie family, but what I never expected was to protect a friend of Desmond’s. She wasn’t Desmond Mackenzie’s friend, but her god-father was. In fact, he was a very close friend of his, and a public figure. So, when Desmond approached me about the job I couldn’t say no. Especially after I heard about what was going on.
Her ex was getting violent with her, and it wasn’t the first time. The only difference was she moved hours away from him to give her and their children a new beginning, but, he wouldn’t leave them alone.
He found them, and since he had, he was only causing chaos. He thrived off her fear and I wasn’t going to let it continue for much longer. That’s when I realized this had become more than a job to me. Kiera and her girls had become part of my life, and I’d do anything to protect them, no matter the cost.