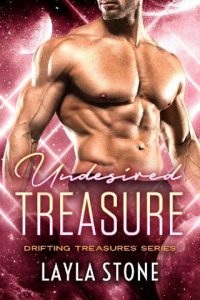 As a boy, Seajay was found in the bowls of a slave ship, rescued and adopted by Seso and Mei.
Now grown and ready for his first assignment, Clalls assigns him to watch over a shipment to make sure it’s not seized by pirates. But that is exactly what happens.
Seajay and his crew are captured, bound, and sold as slaves on a strange planet. Losing the shipment was a hit to his ego but losing his crew is unacceptable. Seajay is determined to break free, find his people, and return to Drifting Treasures. But there’s one big problem: while attempting escape, Seajay crosses paths with an arresting female who captivates him like no other. With so many people relying on him, Seajay needs to learn to trust his instincts and will have to allow his dark side to take control—at least for a bit.