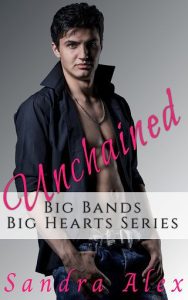 He sings behind powdered courage. She’s got his greatest hits album in her backseat. And just when they think the grass is greener together…it turns blood red.

Storm is the sexiest man alive. He just doesn’t know it. What he also doesn’t know is that I’m his biggest fan. Until he shows up at a mutual friend’s place of business one day, and there’s no denying it. But behind those musical lips is a man standing on a ledge, and I’m not sure who or what can talk him down off it. But I’m not about to abandon him. At least, not by choice…

The second she walks into Ray’s office, I’m done. Dez is the most beautiful woman I’ve ever seen, hands down. But I can’t tell her why I’m here, at a psychiatrist’s office, so, instead I tell a lie that I’ll later regret. And just when I think that I’ve led her on, she shows me in a way that I never dreamed, that she already knows. We fall fast and hard for each other, despite my secret, despite how bad things get at a time when they should be getting better.

And then it happens one night. The other shoe falls during a show, but the world is shocked to learn who sets our course on a different path…and who will be the one clinging to life.