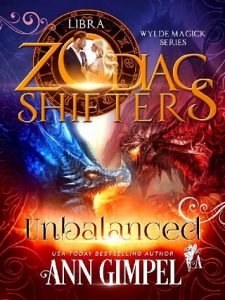 Sparks ignite
Flames turn hot
Scorching hot
But what would you expect from two dragons?

Zachary Marston, dragon shifter, hasn’t done a whole lot of shifting lately. Nope, he spends his time buried in law books as he presides over Superior Court in Denver. He’s convinced himself things are great, but his dragon has other ideas. His bondmate is a tough adversary. After it threatens to abandon him, Zachary gives in and agrees to a meeting with a few other shifters. Maybe he can help out—before returning to his cushy courtroom.
Chloe’s always longed for a bondmate of her own. After her twin brother links with a lion, she ups the ante, casting every spell she can think of, but none of them work. Even the smoking-hot dragon shifter who crosses her path can’t ease the sting of remaining mateless.

Vampires are gaining strength, draining mage magic to augment their own. Shifters and mages—the good ones—have to mobilize fast. Libra to his bones, Zachary slings words Chloe’s way, but she’s a Leo and not intimidated by anyone. They’re an unlikely pairing, but destiny won’t be denied. Like it or not, a shifter’s mate is in the stars.
.
File Details: