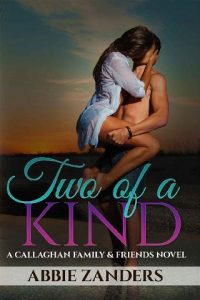 Two of a Kind by Abbie Zanders – Free eBooks Download

Spencer Dumas is an asshole, and he’s fine with that.

As the CEO of Dumas Industries, the billionaire playboy couldn’t care less what people think of him. He’s got money, power, prestige, and plenty of female attention to keep him satisfied. In fact, he wants for nothing, except possibly the one thing his wealth and privilege won’t allow: a life of his own.

Kayla O’Connell is a bitch and proud of it.

Ask anyone in Pine Ridge and they’ll be happy to bend your ear with tales of her terrible deeds. Kayla’s the first to admit she’s made some mistakes, but unlike everyone else, she’s moved on. All she wants now is to live her life in peace, without giving the gossip mongers anything else to talk about.

Staying under the radar isn’t hard – until she crosses paths with the corporate bad boy at an exclusive island resort. She knows she shouldn’t, but there’s no denying the instant and powerful sexual attraction between them. Being so far away from home, they can indulge their darker sides and do wicked, wicked things. No one ever has to know.

It wasn’t supposed to mean anything. It was only supposed to be a one-time thing, never spoken of again. After all, villains don’t deserve happy endings.