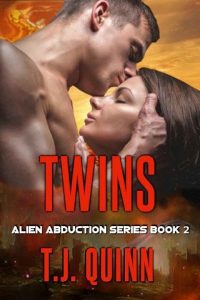 Sandra and Shannon are identical twins whose lives change drastically when they are abducted by aliens to be sold either as slaves or as life partners to other aliens. Sandra is dismayed to be separated from her beloved sister on the journey to the sale. They are both unhappy to learn at the sale they will be going to different worlds.
But Shannon has a plan. She steals a communication device similar to a cell phone and gives it to Sandra when one of the guards allows them to say good bye. Shannon will get another device and call her with a plan to escape.
Sandra’s buyer arrives to claim her and she is distressed to feel an attraction to the big, handsome alien who bought her. He thinks he had paid a kind of dowry for a willing mate, but he finds out different when he takes her back to his ship. He gets her into his room and expects her to have sex with him before she even knows his name.
Cyran, who bought her to be his mate and life partner agrees to allow her to get to know him before they have sex, when she makes it clear that she never signed up for this. Her prospective mate wonders about the wisdom of buying a life partner.
Sandra doesn’t want to care for Cyran or be attracted to him but she is attracted to him and he uses that as leverage to seduce her into his arms until she can no longer resist making love to him.
But that’s not the end. Sandra learns that Cyran’s life has not always been enviable. He has demons to face from his past that will change both their lives.