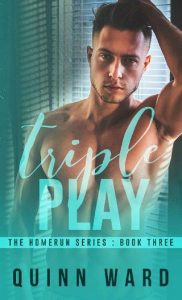 When Eric is unable to help his friend recover, he has to put his feelings aside for a second time. He never imagined the man who could help would be the glue that bound them together.
Drew Jackson had it all: a family who loves him, a tight circle of friends, and he’s a rising star with the Milwaukee Mavericks. Then, it all begins to unravel when the man he’s loved since they were kids falls for Drew’s teammate.
He makes a critical mistake in the playoffs he’s not sure he’ll be able to recover from.
And then, his world really crashes around him…
Eric Sapp may no longer play for the Mavericks, but he’s still one of the guys. After stopping a brutal attack, Eric is forced to face the feelings that have been growing for his roommate, Drew. That’d be much easier if Drew wasn’t hell-bent on pushing everyone away as he recovers.
Neither of them were counting on Bryce Shaw. He and Drew enjoyed the one night they spent together, but knew it was unlikely they’d be anything more since they lived in different parts of the country. When Bryce is relocated to help a failing LGBT homeless outreach, he wants to explore something more with the Mavericks’ short stop.
As much as Eric wishes he could be the one to help his friend, he knows Bryce holds the key to Drew’s recovery. Will pushing the two back together be the biggest mistake of his life or will they all learn there is strength in numbers?
Curve Ball is the third book in the Homeruns Series, previously published under the pen name Sloan Johnson.