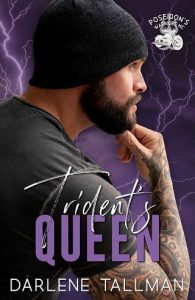 Brock “Trident” Storm is an emergency room trauma nurse, using the skills he honed during his time as a Navy SEAL, he takes care of those in the community that Poseidon’s Warriors MC claims as its own. He’s content to love ‘em and leave ‘em. That is, until he treats a woman one night, who touches a part of him, one he thought was long dead. Each time she comes in, he finds himself drawn even more toward her until that last visit that landed her in ICU. Then, he just wants to get her safe and shot of her husband.

Gianna Jeffries had it all at one time – the socialite wedding, the jewels, the money, the cars. That all changed when she developed an autoimmune disease that prevented her from giving her husband an heir. Broken and battered, she finds herself under the care of an intense, slightly intimidating nurse who calls to the pieces of her that remain.

With the gangs ramping up their vandalism, the PWMC is hard-pressed to keep their community safe. Will Trident be able to handle the pressures that come with being the enforcer of an MC, running one of the club’s businesses, as well as working at the hospital, while still pursuing Gianna? Will Gianna realize that there’s more to life than being a showpiece on a pedestal and rid herself of the abuse she’s endured?

**Suitable for ages 18+ due to adult content and language