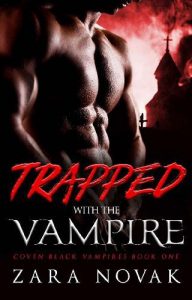 Vampires and humans have lived side-by-side in peace for years, but when a group of outlaw covens band together to wage war everything is set to change for the worse.
Everything was going great for Cassie. She had a good job, a good fiancé, money in the bank and a great life ahead of her. In an instant it’s all ripped away, and her head is left spinning as she tries to put the pieces of her life back together.
Things go from bad to worse when she’s caught in a full-on vampire war during an ordinary night out.
With the help of a friend Cassie manages to sneak into Club Black, an exclusive vampire watering hole which is a stomping ground for the beautiful and culturally elite. In a world of shadows, supermodels, and millionaires, she feels completely out of her depth, and things only get weirder when she’s forced to fight and run for her life.
That’s when she discovers her strange power.
Using her newfound ability, she makes a break for it, fleeing for her life as the world breaks all around her. Before she can escape, she’s stopped by a sexy alpha vampire, the leader of the very coven under attack. He seems to think Cassie has something to do with it.
Suddenly Cassie and the powerful alpha vampire are forced into running for their life, and her captor leaves the danger of his territory behind to find a hideout where they can lay low together.
They soon discover their hideout isn’t much safer, and now they’re trapped together, surrounded by a completely different kind of trouble. Can the alpha keep Cassie and her unusual power safe? Can she reconcile the new secrets living inside of her? If they don’t, they might just die.