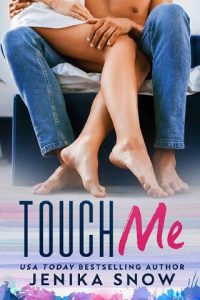 Being with the only man she’d ever loved would have been a forbidden romance.

After Freya’s father passed, she decided to pack up and leave everything behind, but that meant leaving Elijah, too.
Not only was he older but their lives were entwined, so regardless of her desire, the possibility of them being together seemed next to impossible. But love had a funny way of making a person disregard what was right or what was deemed wrong.

The heart wanted what it wanted.
And she’d only ever wanted Elijah.

Now four years later, Freya was back in her hometown and that longing and ache in her heart remained. But everything was different in the best kind of way, and the forbidden aspect of her love didn’t seem so wrong anymore.
As passion ignited, truths were revealed, and love was tested. Freya knew she could either follow her heart or let it break a second time.

Reader note: This book was published previously under the same title. It has been recovered, re-edited, and has undergone minor tweaks. The story itself is the same. This is a forbidden romance, and there may be subject matter that may be sensitive to some readers.