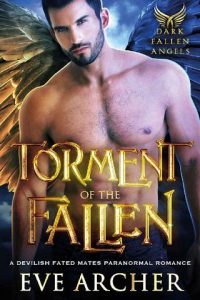 Falling in love with a human is the last thing I wanted to do. Then, again, she isn’t exactly human. Not anymore.

Sara was the beautiful, intriguing best friend of my boss’s mate. She was off-limits, which was no problem for me. Relationships between humans and fallen angels never worked out. I could desire her from afar and never touch, telling myself that a future was impossible.
But when she was saved from death by an angel’s healing powers, Sara became the carrier of an angel’s mark. Now she’s a target of both celestials and demons, and she doesn’t even know it.
It’s been millennia since I felt so strongly for a woman, and I don’t know if it’s even possible for a tormented soul like me to be happy. But I know I can’t let the demons get their hands on her—even if it means breaking my vow and forfeiting my life to the demon prince I pledged my soul to for the next year.
Can I resist the pull of her angelic mark and stay away from her, or will I be drawn to her like a moth to a burning flame that threatens to engulf us both in its hellfire?