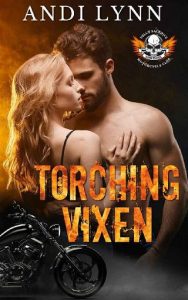 Vixen was looking for escape the day she talked her cousin into running away with two bikers. She didn’t realize the hell she was tossing them into. Several years later, she’s beaten down and ready to give up and throw it all away. She would except for the fact she feels completely responsible for dragging her cousin, Logan, into it with her.
The last thing she ever expected was her life to change forever when members of Hell’s Sacrifice MC walk into the clubhouse, she’s called home for years. Or for the club VP, Torch, to take an instant liking to her.
When Torch and his club leave, she and Logan are on the back of their bikes. But Vixen has a secret. One that could destroy anything between them before it gets started. One that could cause the club that saved her to go to war. One that could destroy everything.