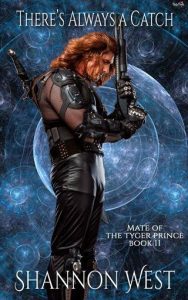 When Ryan gets an unexpected message from an old enemy, asking to see him, Mikos is outraged and forbids the meeting. Like most of Mikos’s orders, this one infuriates Ryan and makes him even more determined to find out what John Matthews could possibly want from him after so long.

When Ryan arrives at the notorious Beatik prison, he steps into a nightmare he can’t seem to awaken from. After he and his guards are brutally attacked, Ryan is hurtled into a world he doesn’t fully recognize—a place where nothing is the same. He’s back on Earth, unmarried, working at a low-paying police job, with a Tygerian son. Things begin to unravel even further when he’s called into police commandant Renard Dimitru’s office and warned that Dimitru is watching him because of his history with terrorist resistance groups. Recent bombings in the area have caused the police to look at anyone who was ever involved in such movements on Earth, and that definitely includes Ryan, the former and disgraced mate of the tyger prince, who was sent back home after being involved in a plot to kill Prince Mikos and his younger brothers. Dimitru isn’t interested in Ryan’s protests that he was completely innocent of the crimes he was accused of.

Over the next chaotic week, Ryan finds himself face to face with people from his “past,” including a confrontation with Blake and a fiery and passionate reunion with Mikos himself. But King Davos is unforgiving and wants Ryan to stay out of Mikos’s life.

When Mikos and Ryan meet again, their fierce and fated attraction to each other defies all logic or reason. Their feelings for each other make it impossible to part again, though if they stay together, Mikos has to be willing to face down his father, give up his claim to the throne and possibly sacrifice his own life. If he can pull it off, however, and keep Ryan by his side, he might just get everything his heart desires.