Home
contemporary romance
Then I Saw You by Kate Stacy (ePUB) 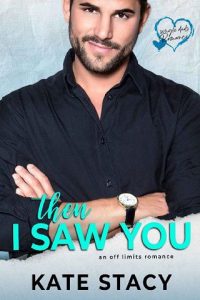 Firefighter Marshall Knight is more than happy living the single life and working toward his next promotion with the fire department until his world is flipped upside down when he finds out that he has a child. Abandoned by his own mother as a small boy, he’s determined to do the right thing and take care of his son, stepping right into the role of a single father and leaving no time for things like a relationship and romance.

One trip to the ER with his baby boy changes all that and he finds himself instantly enamored with Kaitlynn – the compassionate nurse who’s been assigned to them.
Kaitlynn Bennett made herself a vow a long time ago to never date a firefighter. Between her father’s job as Fire Captain and losing her own mother in a fire when she was twelve, she knows all too well the heartache that comes along with all of it.

Which is exactly why she had no clue that the sexy single dad in the ER was actually a firefighter. Their attraction is undeniable and with a little nudge from a friend the two find themselves in an inferno of their own. That is, until Kaitlynn discovers he’s a firefighter and Marshall realizes that Kaitlynn is his Captain’s daughter. It’s the perfect excuse for both of them to give in to their own insecurities and put plenty of distance in their already complex relationship.

But when a fire strikes and they both end up in harm’s way, will they finally realize that building a life together is far better than a lifetime apart?