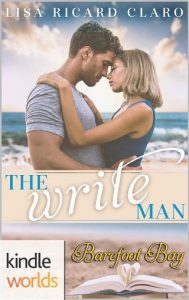 She’s afraid to trust . . .
Trust comes hard for kid-lit author Merry Sunjoy, who survived a rough childhood and rocky marriage to a pathological liar. But Merry ignores her painful past and seeks silver linings everywhere, though she’s tested by Scurvy Rickets, a writer of raucous pirate stories for kids, who has engaged Merry in a humiliating social media battle. Adding to her anguish is her sister’s miscarriage and the upcoming anniversary of their mother’s death. Merry escapes to the golden beaches of Mimosa Key to hide from the world and write her next book.

He can’t tell her the truth . . .
Syndicated sports columnist Nick Brubaker isn’t looking for love when he meets Merry Sunjoy on the beach, but her sunny, impetuous ways heat him up fast, and she soon owns his heart. They take moonlit walks and share deep confidences, but Nick withholds his most important secret: He is Merry’s detested online nemesis, Scurvy Rickets. A legal contract enforces Nick’s silence, and he can’t divulge his nom de plume or his misbelief that Merry knew the online ribbing was arranged by others for promotional purposes.

Hidden words, hidden meanings . . .
When Merry accidentally discovers Nick’s secret, the betrayal cuts deep, and Merry uses Nick’s contract of silence against him. It will take deft writing on Nick’s part to convince Merry that he’s worthy of her love and trust, and that while he may be The Write Man, he is also, and will always be, the right man for her.