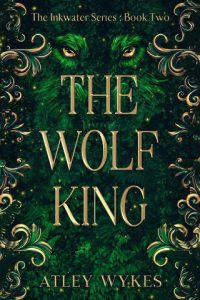 “You must rule with tooth and claw—a wolf amongst lesser dogs.”

Lowan’s father ruled the pack with cruelty for centuries. After his death, Lowan is left in the ashes of the fallen Inkwater swamp, desperate to save his people and maintain the fresh peace with the fae without resorting to the same tactics as his father. They only ask one thing from him to solidify their fragile alliance…

He must take a fae bride.
Chrystalyn always knew her father’s ambition would bring about her ruin, though she never thought it would be this complete. Her plans to flee her father’s clutches and explore her secret heritage are lost when he threatens to expose her. She’s met with an ultimatum…

Marry the beast or resign herself to live forever under her father’s thumb.
Her father promises her this will be their last ploy and that he’ll give her the information she’s always wanted. As Chrystalyn reluctantly helps put her father’s plans in place, she bonds with her husband, who isn’t anything like the fearsome creatures of their legends. He’s handsome, kind and entirely too tempting which presents a new problem.

She’s fallen for him.
It doesn’t matter that she isn’t his true mate. That helping him would leave her with nothing. His gentle smiles and wild nature thaw her frozen heart until she’s left with one question.
Will she help her father to gain what she’s always wanted, even if it means betraying the man she loves?