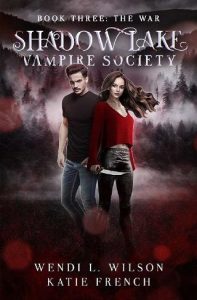 With the way people are coming back from the dead, I wouldn’t be shocked to learn we’re in the midst of a zombie apocalypse.
But we’re not. It’s just become my new normal in this insane reality I live in. My father died, my best friend was killed, someone wants me dead. Oh, and an unbelievably high percentage of the people I love drink blood to survive.
Just another day at Camp Shadow Lake.
I can’t bring myself to regret any of it, even when an old vampire feud comes to a head—with me at the center of it all. The leader of the Shadow Lake Vampire Society has had a secret agenda all along, doing whatever it takes to maintain the status quo. Killing people, changing them into vampires, drinking from unwilling humans, and using compulsion to get whatever he wants…well, except me, that is.
But the rogue vampires of the Siskiyou Mountains are here to stop them, led by someone I thought I’d lost forever. And I refuse to lose him again. Warren Thornberry and his band of evil minions are going down, for good.
This is war.