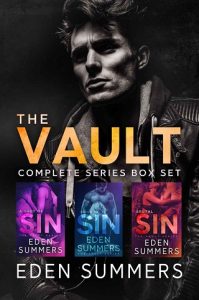 A Shot of Sin
Throw back a shot of pure pleasure. Leo Petrova has a wicked secret that’s about to get blown wide open. The exclusive VIP area hidden beneath his night club, Shot of Sin, is short staffed a bartender. The only available replacement is Shay—his temptation, his distraction—the one virtuous woman he has refused to escort down the secret staircase. Until now.

Union of Sin
He’ll do anything to protect her. Even if it means letting her go. Tate Jackson made a big mistake. He picked the wrong place to introduce his wife, Cassie, to the alluring lifestyle they’d fantasized about. And she was assaulted because of his carelessness. He’ll do anything to protect her from another traumatic experience, even if it means making the agonizing choice to convince his wife he no longer loves her.

Brutal Sin
Falling in love will be brutal. Bryan Munro is ruthless, heartless, and more than a little proud of his notorious reputation, until his bad attitude threatens to strip him of the one place he can’t live without. His sanctuary. The Vault. The exclusive club is the only place he feels at home, and he’ll do whatever it takes to reclaim what is his. Even if it means asking for help from the woman who landed him in trouble in the first place.