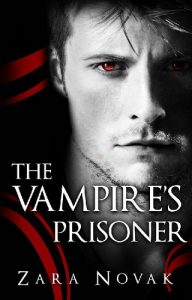 Kat had always believed in vampires, and one night her search for truth brought her to a dark and mysterious bar on the edge of town. She soon realizes she’s made a grave mistake, and runs for her life, only to fall into the arms of a dark and mysterious stranger.
Kat is bewitched by the man’s strange beauty and mysterious ways, but what she doesn’t realize, is that he’s an outlaw vampire on the run, being hunted by a dark and powerful force…

Ansel Draco is a vampire out for revenge. Hunted and kept as a prisoner by his own makers, Ansel managed to defy death at the last minute and break free. Now he’s out and running for his life, waiting for the perfect moment to get back at the dark society ruling the world of vampires.

That’s when he runs into Kat, and everything in his life is turned upside down. Ansel quickly realizes that there is something different about Kat, and then, she’s swept into his outlaw world, forced into running for her life right alongside him. Kat has a precious gift, and he’ll protect it with his life if he has to. Now he has her in his arms, he’s not letting go.
Fate works in mysterious ways, but their story is just part of something even bigger…