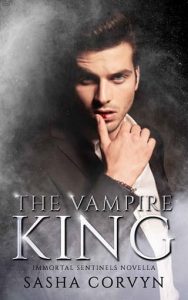 Killian Marx has known nothing but betrayal, his throne—his vampiric birthright—stolen from him as a boy. Exiled in the mortal realm, he has spent over two centuries plotting his revenge on the one who destroyed his life. He burns to kill the vampire Marikus.
Karina Mathias—the hybrid bodyguard to Marikus—has been Killian’s sworn enemy from the moment he was exiled, her hatred for him unrivalled. An assassin sent to ensure his death.
One taste of her blood though, and Killian is addicted. The very female he’s supposed to hate is also the one that heats his blood, an obsession he can’t fight. She lures him unlike any other, her hatred fuelling his desires.
Even after regaining his throne, his victory fades to the background when a taste of her immortal blood is on offer. Claiming her—owning her—is his only endgame…