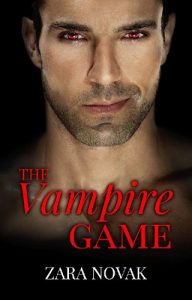 Lucien Voss wakes from ten years of slumber to find his Coven is a mess. His uncle has been murdered. A dangerous vampire has taken over. Now it’s up to Lucien to fight back.
First, he ventures into the city for a night of company. Ten years have a habit of making a vampire restless, and boy, he is feeling restless. The night seems like any other at the start, but then he sees her for the first time. Emily.
Emily is caught in the middle of an extremely strange night, and thing only get stranger when she lays eyes on him. Lucien.
Dark hair, pale skin, sparkling red eyes. His control over her seems effortless, and it isn’t long until she’s helplessly under his spell.
That’s when she learns the truth. He’s a vampire. And not a good one.
Fate thrusts the pair together and lust and loathing quickly spark. It’s all Emily can do to run away, but it soon becomes apparent that sticking together might be the better option.
Both their lives hang in the balance now, and there’s only one way to get out:
They have to play The Vampire Game.