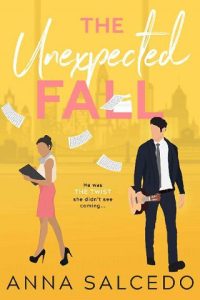 Genesis Gonzalez has spent the last two years trying to prove herself at Siren Music Records. Despite her dreams of creating music, she’s been stuck as an assistant who spends most of her day answering emails, taking notes in painfully long meetings and avoiding Will Kobayashi, the 6’2” bane of her existence.
She was just about to throw in the towel when her job announced an opportunity that could change everything: A work contest that would allow two employees the opportunity to have their song on the label’s highly anticipated collaborative album that features music from all their hottest artists. Getting her name on that album would be an almost guarantee that she’d finally get to say goodbye to being an assistant and hello to producing music. But her plans take an unexpected turn when she finds out that she gets paired with Will, who she is humanly incapable of getting along with.
They have three months to create a song that will impress the record label enough to make both of their dreams come true. But the one thing Genesis could’ve never seen coming is that the only thing harder than getting along is not falling in love…