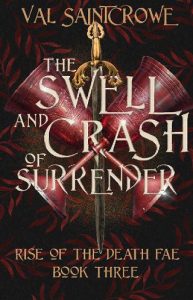 The capital erupts. Their forces swollen with the raised dead, the fae armies overwhelm the empire’s legions and crush them in one bloody day. In the wake of the battle…
Magdalia tries to make her husband Duranth, the Croith, see that their magic has no concern for their people. It only wants blood. Can she hold it back, or will she and her king be swallowed whole in the ecstatic madness of dark power?
Naxus Albus, dux bellorum, deserts the legions for the love of a woman he calls Galvia. What he doesn’t know is that she’s a fae spy, and that she was sent by his half brother Larent to destroy him.
Olirius Cassus knows the fae woman Isha in his cage is useless to him in the wake of the capital’s demise. He should kill her. But it does seem a waste to destroy something so pretty.
Prantia Onivia is safe on the other side of the mountains in Emmessia, where she will do anything to protect her unborn child, even court the attention of the Emmessian emperor.
Legatus Larent isn’t dead for some reason, even though that’s what he deserves. If he can’t die, he’ll protect his people, even if that means protecting them from their own Night King, who is increasingly erratic and violent. Above all, most importantly, he’ll stay away from Onivia. Forever.