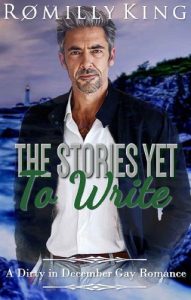 Mori Winters, hedonist, man about town, utter urbanite could not understand the attraction of Maine. When his best friend, business partner, and fellow dominant Alex Styles had moved there Mori gave it a month. A year later Alex was still in residence, not only that Alex now had a collared submissive his own age (please! urgh!) and appeared to be “happy”. It was crazy, the best part of getting older as a gay man was attracting adoring younger ones who were impressed by you.
Alex’s latest ridiculous idea involved setting up a kink club for seniors in this backwater, and Mori needed to do something about that. It was bound to cause a ton of pearl clutching, and it wasn’t a great reflection on their business brand which prided itself on being cool and on point. Kinky wrinkly was not a thing he saw trending any time soon even if, theoretically, he was one.
He was on his way to put a stop to the Dirty in December Club, just as soon as he got past the herd, flock, shoal of sheep that were blocking his way. If only the elderly mountain man that was strolling along behind them would move them to one side. Damn, the man was big, beard like a Lord of the Rings extra on him, and why the hell was he reading while sheepering, sheepisting, whatever? Was that a romance novel? And was that spotty sheepdog laughing at him? Mori felt he was getting out of his depth, he wasn’t used to that.