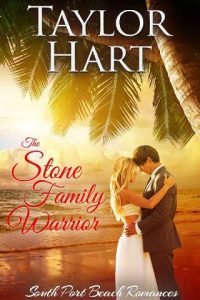 A warrior losing his faith. A not quite love from summer’s past. A second chance at love that might soothe the broken parts in both of them.

Trent Stone, Navy SEAL, won’t give up his obsession with finding the conquistador gold. He’s going to crack the cipher. He doesn’t care if it’s the week of Christmas, he doesn’t care if his siblings think he’s crazy, and he really doesn’t care if his twin thinks he needs to relax. He’s NOT relaxing. Okay, maybe he’ll relax a little bit and go on a date with a girl who interrupts his warrior chanting. Not because she’s beautiful or he discovers she left him a note the day before she moved when they were sixteen. Only because he needs to eat. Having dinner with someone doesn’t mean he’s RELAXING, he’s not!

Liberty Grey doesn’t want to be in South Port. She doesn’t want to sell the house she inherited from her grandmother and she really doesn’t want to run into the jerk guy who unknowingly broke her heart twelve years ago. Not THAT big of a heart break. She’s had plenty of other things that really broke her heart in the past two years that the teenage stuff seems silly. But it takes her by surprise when he asks her to dinner. She tells him no. She couldn’t. It’s too soon. Plus, she doesn’t date. Even though her therapist told her she needs to open her heart again, she can’t. Especially not to a guy like Trent Stone. No way. Pfft. Okay, maybe she noticed he’s built and kind of hot with his SEAL attitude of ‘kicking down doors and taking no prisoners’ but … she can’t.

When a chance meeting awakens memories neither of them expected, they find themselves—not just kissing in the library, but messing things up so badly that they one of his father’s journals breaks … and a trail of Polaroid’s fall out. Polaroids that just might be the clues to deciphering the numbers on the treasure map his parents left behind.
When Liberty insists on helping him figure it all out, they never would have imagined the fun, the danger, or the love they might fall into. Will they find the gold so many have searched for?