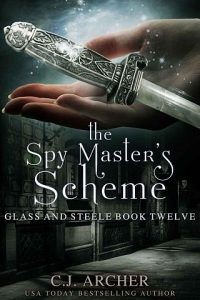 With knowledge of magic becoming more widespread in London, magicians find themselves highly sought after. Consumers want to buy their wares and so seek out magicians among their acquaintance. India’s rare magic is in demand from Matt’s family, the Collector’s Club, and other magicians who want her to extend their magic.

But it’s wise to be wary of the attention.

When the wool magician who helped India create a flying carpet spell disappears, his wife is worried for his life. India and Matt are worried for the country. If the person who stole the spell also kidnapped the wool magician, they could use flying carpets as vehicles of war. The closer they get to finding him, the more they realize they can’t trust anyone, not even the government. When it’s revealed that England’s spy master has plans for India’s talents, she refuses to cooperate.

But Matt knows it’s not as simple as refusing. Every decision has a repercussion.
And repercussions can be deadly.