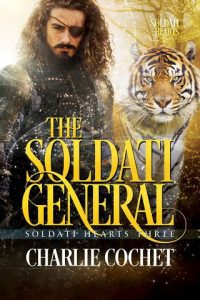 A powerful, yet awkward, Soldati healer. A retired Orso general. A plot to kill the king. A secret that could destroy them all.

The Summer Solstice Festival has arrived in the Soldati realm, and guests from all over flood the kingdom to join the festivities. But the excitement is shadowed by rumors of an Orso plot to kill the king. Now Ezra and the Soldati council must protect Khalon’s secret—and stop a conspiracy that could destroy the Soldati and the human world they protect.

As Ezra and General Segreti explore their growing affection, a dangerous game begins, but are they the pawns or the players? Can their hearts survive the final checkmate?