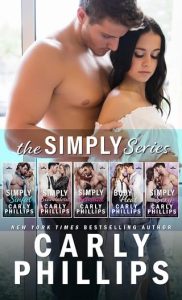 5 Carly Classics from the bestselling Simply Series in one hot bundle!

Simply Sinful
He’s not the man she thought he was. But when danger lurks, he’s the man she needs.
Any rookie on the force could verify if Charmed! is a legit etiquette school for businessmen, or…something else. But coming off a wrenching drug bust, Detective Kane McDermott’s captain gave him a choice. Take the fluff case, or take enforced time off.
The moment Kane meets Kayla Luck, he’s in trouble. She’s fierce, keen-eyed intelligence in a body built for sin. And when they touch, the jolt of desire reminds him it’s never wise to mix police work with pleasure.

Simply Scandalous
He runs in high society circles…and he’s running circles around her heart.
In retrospect, it was all Gran’s fault. Logan Montgomery has found his niche as an assistant district attorney. But Gran just revealed some worrying intel—dear old dad and his political cronies are about to maneuver him into running for mayor.
But Gran has a plan. A pre-emptive strike involving a pretty blonde caterer with supple curves—and a family history literally dripping with scandal.

Simply Sensual
Do the job. Take the money and run. Until, in a flash, love changes everything.
In retrospect, Ben Callahan should have known this job was trouble.
Way more than his normal P.I. fee and unlimited expenses, just to watch over one woman and report back? Alarm bells should have sent him running back to New York. But with his Mom needing assisted living care, Ben takes Emma Montgomery’s tempting offer to watch over her granddaughter.
Then he meets Grace, a golden-haired princess. Gifted, gorgeous, reckless. And a serious threat to his sanity as well as his libido.

Body Heat
NYC summer days are hot. Nights are even hotter…
Not much has stirred Detective Jake Lowell’s interest since a perp put a bullet in his shoulder, killed his partner, then walked on a technicality. Until a sexy waitress at a tiny neighborhood café catches his eye. Physical therapy is the last thing on Jake’s want-to-do list, but he needs it to get back on the street and track down the killer. But what’s a guy to do when he meets his new PT—and it’s his smoking hot café angel?

Simply Sexy
It all started with a not-so-innocent sprig of mistletoe…
In retrospect, Rina Lowell should have known that Emma Montgomery’s mistletoe was a matchmaking ploy.
When Emma maneuvers her under that pesky sprig of evergreen with Ashford’s prodigal son, Rina can’t resist the chance to plant one on that dark-haired, blue-eyed man’s sensual mouth. She never expected that kiss to go down like a shot of fine tequila. The man is perfect for her, or so she thinks.
Colin Lyons never expected one kiss to take his simple plan to save the Times and tie it into impossible knots… and possibly cost him the woman he loves.

Note: These titles were originally published in 2000 – 2002 by Harlequin Temptation, Blaze. They appear here in their original glory, without substantial revision.