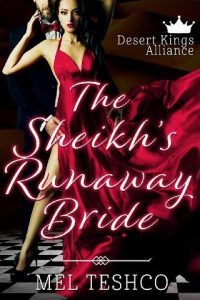 Sheikha Arabelle only wants to live a normal life in England on her own terms, with her strict Middle Eastern heritage a distant memory. Then her only brother dies in a freak accident, leaving her father and their country of Lumana vulnerable. Until her father secures an arranged marriage between Arabelle and Mahindar, the celebrated Sheikh of Rajhabi. But although she is forced to marry Mahindar, her husband can never force her to love him…no matter his wealth, his good looks and his skill in bed.
Can Sheikh Mahindar prove to his bride that she can be happy as his wife? Turning his country, Rajhabi, from war torn and destitute to the richest and most peaceful reign in known history seems like child’s play compared to convincing his stubborn wife to give their marriage a chance. But he’ll do whatever is necessary to change her mind and win her heart.