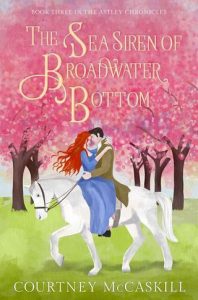 Thanks to an imprudent wager made by his younger brother, Edward Astley has to win a classical translation contest being hosted by Oxford University. This means he’ll have to beat the latest star on the literary scene, the anonymous translator whose rendition of On the Sublime is taking Britain by storm. He’s supposed to be studying, but all he can seem to think about is Elissa St. Cyr, the redheaded daughter of his former tutor, who’s every bit as brainy as she is delectable.
Elissa has problems of her own. With her father’s health failing, she’ll soon need to support her mother and sisters through her translation work. And that means she needs to win the Oxford contest, so she can secure the one thing she has never had the opportunity to earn: an academic credential.
To make matters worse, she managed to get stuck in the middle of a pond during a thunderstorm, and the person who happened along to rescue her, witnessing her in the most humiliating moment of her remarkably humiliating life, was her ultimate beau idéal, the brilliant Edward Astley. Now Elissa keeps bumping into Edward everywhere she goes. Which would normally be wonderful …

… except she’s worried he’s going to figure out that she is the anonymous translator everyone is talking about.