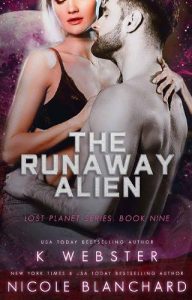 Everyone found their mate.
Except me.
I’m destined to die alone.
Being jealous of my brothers and their happiness is something I’m not proud of. But this simmering anger won’t cool. I want to move past my own feelings and focus on winning the war against the Kevins.
But then she calls for help.
Stella.
She’s fierce and protective over her son, but she’s no match against a pack of sabrevipes—or the Kevins here to destroy us.
Time is of the essence, and she needs me.
It means running from the fight my people are in the midst of and setting off on a reckless mission with terrible odds.
I’m determined, though.
I’ll protect my runaway alien at all costs.
Stella may hate every creature on Mortuus, including us morts, but it won’t stop me from keeping her and her son safe.
If she hates me for that, so be it.
I’d rather have her annoyed company than spend another second alone.
Fate has brought me to them, as though delivering me right to my mate.
All I have to do is convince her she’s forever mine.