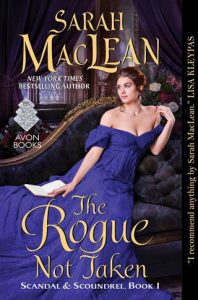 The youngest of the infamous Talbot sisters scandalized society at the Liverpool Summer Soiree, striking her sister’s notoriously philandering husband and landing him backside-first in a goldfish pond. And we thought Sophie was the quiet one…
When she finds herself the target of very public aristocratic scorn, Sophie Talbot does what she must to escape the city and its judgment—she flees on the back of a carriage, vowing never to return to London…or to society. But the carriage isn’t saving her from ruin. It’s filled with it.

The Marquess of Eversley was espied descending a rose trellis—escaping an irate Earl and his once-future countess. No lady is safe from Eversley’s Engagement Ending Escapades!
Kingscote, the Marquess of Eversley, has never met a woman he couldn’t charm, a quality that results in a reputation far worse than the truth, a furious summons home, and a long, boring trip to the Scottish border. When King discovers stowaway Sophie, however, the trip becomes anything but boring.
WAR? OR MORE?
He thinks she’s trying to trick him into marriage. She wouldn’t have him if he were the last man on earth. But carriages bring close quarters, dark secrets, and unbearable temptation, and suddenly opposites are altogether too attractive…