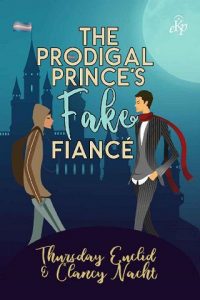 His Royal Highness Morgan Schuyler, an aggressively toppy trans man, wants nerdy Lin Callahan the moment he sees him. When a hurricane in the Atlantic grounds their flight, Morgan seizes the opportunity to share a hotel suite with his petite, cis lust object. Their torrid fling ends with the flight to New York City, but a coffee shop run-in reveals they’re attending the same posh fine arts grad school.

While they’re both still daydreaming about that weekend together, neither will admit it. Feelings are awkward, and Morgan refuses to have them for anyone but his childhood best friend, Carmen. As for Lin…his ex-boyfriend has moved cross-country in an attempt to rekindle a romance that doesn’t hit the same since that weekend in France.

When Morgan’s forced to choose between an arranged marriage and presenting his parents with a fake fiancé, he’ll need to navigate his attraction to Lin without catching feelings. How is it possible to want someone so much and yet be so terrified of their emotional intimacy? Maybe that’s why Morgan still hasn’t told Lin he’s royalty…